<< Back to Blog
Daily Discipline

3 Practical Examples of How Discipline Saves Time and Accelerates Results. 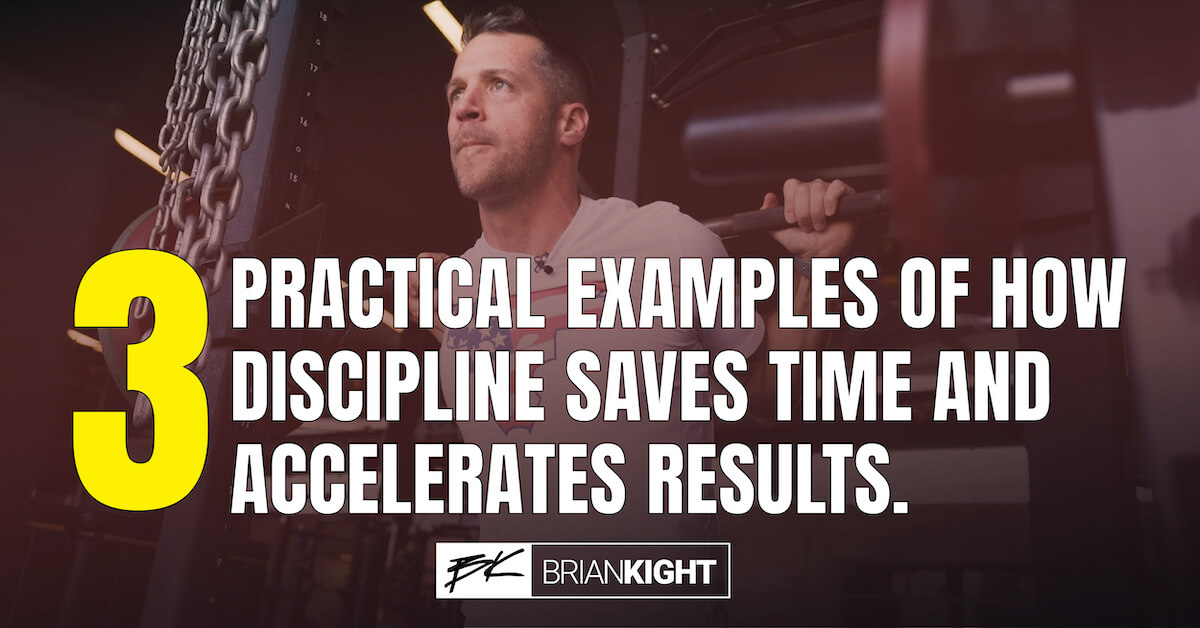 This article is about understanding how to apply discipline to accelerate to your goals. The purpose is clear and simple: help you build the discipline you need to get what you want as quickly and reliably as possible. If that interests you, then let’s dive in.

Talent is common. Discipline is rare. The combination is elite.

I don’t know what you want, why you want it, or when you need it. But discipline is the shortcut to getting it. Everything is accelerated by the presence of more discipline. Everything is delayed by the absence of it.

In your life, how many disciplines would it take to improve one of the bullets from the list above in a significant and meaningful way? One? Maybe two? You might need more patience. You could set priorities and eliminate distractions. You may benefit to lower your ego and raise your empathy. The answers are usually simple and obvious when you step back and look with self-awareness.

It all stems from the discipline to choose and act with purpose. To do something you typically avoid. Or not do something you do too much. Or address an issue you’ve left unresolved. Or put in effort despite your doubt.

So how much discipline does it take to change your life in a significant and meaningful way? Let’s look at three real and personal examples.

If you think about it right now, you can identify something that is taking longer than it needs to because you haven’t done what’s required yet. Everyone can. We’ve all fallen into that default trap.

Pick a direction and start. Change when you understand more.

You have a relationship in your life that’s not in a great place. You know you need to have a serious conversation but you’re not looking forward to it. You expect it to be emotional and difficult, so you keep putting it off because you don’t want to experience the awkward strain on the relationship.

Next thing you know it’s six months later, even more awkward for you, and you’re privately carrying more internal anxiety about it than most people know. Now it’s even harder to have the conversation with your emotions all built up and pent up because you put it off for so long.

With just a little more courage and a little more discipline you could have started the conversation, resolved it within a month, and strengthened that relationship for the past five months. Instead you’ve lost six months and made no progress. You feel stuck.

Discipline isn’t a character trait you “have” or “don’t have”. It’s something you do or don’t do. You choose it or you don’t. It’s a decision you make. It has to be built. It has to be maintained. It has to be improved through the stages of life and across the unique contexts of your life.

Let’s say you’re trying to get in shape or be healthier. Whatever that looks like for you. It’s April and now you’re finally committed. All your friends are on different diets. None of them sound enjoyable. You can workout early in the morning when you’re tired after just getting up or late in the afternoon when you’re tired after just finishing work.

You decide early morning workouts sound better than afternoons. You’re not going to follow any diet, you’re just going to make better eating choices. Diets never work anyway you tell yourself. You believe if you try to be too strict you’ll just binge later.

The first few weeks create good momentum, but you sleep in and skip a few workouts. “No one’s perfect”, you tell yourself. Your eating choices haven’t changed much. “I’ve earned it,” you tell yourself. You rationalize unhealthy choices because you worked out a few times. You notice it, but you don’t correct it.

After six weeks you haven’t noticed any progress. Same basic weight. Same basic shape. Same basic feel. Working out every day and eating right hasn’t gotten easier. If anything it’s gotten harder. The strength of your initial commitment and energy of your early motivation has faded. It doesn’t feel like a “habit” yet. Sound familiar? Let’s see where this story goes.

You think about staying with it for another two months, for the year, and it feels overwhelming. Impossible. Plus you haven’t seen it make any difference yet.

A few more weeks go by. Then a few months. Life takes over. Your commitment fades. Work priorities. Social calendars. Holiday events. All of a sudden it’s Thanksgiving. Then Christmas. Then it’s April again.

Painfully you realize an entire year has passed and you’re back where you started.

With a little self-confidence and a little discipline you could have followed through on your initial commitment last April. That’s 12 months of missed opportunity for progress. A year doesn’t seem so long now looking back, does it?

Let’s say your organization announces a new strategy that requires you to follow a new process. You’re not a big fan of the change because you already know how to produce good results the way you do it now. The new approach disrupts what is familiar and reliable for you.

The new process is uncomfortable, which makes you slow. It’s confusing, which makes you sloppy. You decide you can’t afford to waste time learning the new approach if you want to continue performing well. It takes too much effort and energy away from doing valuable work.

You sit through training, say the right things in meetings, and comply enough to keep your boss off your back. Mostly you try to be left alone and trusted to do what you’ve always done, the way you know how to do it.

Two years pass. Changes are coming faster and faster, each one adding another layer of pressure and frustration. You’re working harder than ever but your performance has plateaued because you’re overwhelmed.

Another year passes. So much change has entered not just your organization, but your whole profession, your whole world. You’re behind and it feels like you won’t catch up.

With a little self-awareness and a little discipline you could have learned new skills three years ago, been at the top of your game by now, and become a leader in your environment. Now you’re afraid it might be too late.

When is discipline the shortcut?

Always. Every time. In everything that matters to you and the people you care about.

Don’t equate shortcut with a short path. Sometimes the shortest path between where you are and what you want is a long one. It takes what it takes, nothing less. There are things you’ll need to accomplish that will take at least two years. And that’s if you’re disciplined. Don’t turn a two-year path into a ten-year problem because you’re stuck on-autopilot the first five years.

The early bird gets the worm but good things come to those who wait.

To some people these are competing statements that make a confusing sentence. Not to me. They’re both true. You just need the discipline to combine two things that are rarely combined: urgency + patience.

Think in 24 months of vision executed in 24 hours of focus. Be urgent in your days and patient in your years.

Time is your life. Every second of it will be used on something.

Time is uncompromising and unrelenting. It moves at the same constant pace. And you don’t know how much you have. Once it’s gone, it’s gone forever.

You have plenty of time to use and none to waste. Not competitively. Not professionally. Not personally.

The simple skill of time is an intense focus and discipline in how you use it. There is no “unused” time. You use every minute, of every hour, of every day to do something.

Leaders: Prepare for the second wave and I don’t mean COVID.

Coronavirus has made it a tough first half of the year for a lot of you. Holding your team...

Distraction is Killing You: 4 Ways To Get Focused

Take a moment and think of all the distracting things you've given your attention to today outside...