How I learned The E+R=O Mindset and it changed my life. 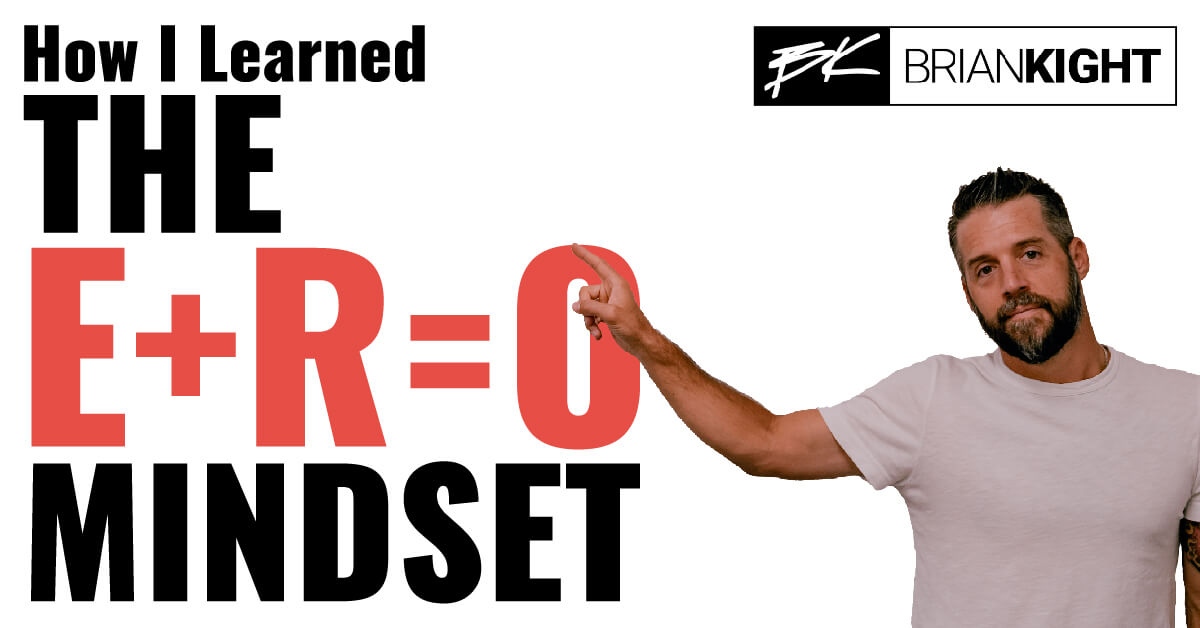 Before I learned what The E+R=O Mindset means (Event + Response + Outcome) I had already been living part of my life by it. I just wasn’t aware of it. Once I trained how to apply The E+R=O Mindset it became the most powerful approach I use to guide my personal and professional life.

The best tools are the ones based on principles you’ve always believed in but never realized could be distilled into a simple and usable system. For me, and so many others, that’s the power of The E+R=O Mindset.

If for some reason I was only allowed to use one guiding framework it would be E+R=O. It’s the mental model I rely on more than anything else and has been almost as far back as I can remember.

Like many kids, I grew up with divorced parents. They divorced when I was young enough that I have no memory of them together. My parents are wonderful people. They just didn’t want to be married to each other. I think that’s for the best.

The earliest thing I remember is the weekly transition of going from my dad’s house to my mom’s and vice versa. My dad lived in San Diego and my mom lived two hours north in Los Angeles. Anyone familiar with kids and divorce knows about “the exchange” or “the handoff”. They would drive me and meet halfway at a McDonald’s parking lot off the I-5 freeway. I still remember the exit: Avenue Pico. I don’t know how many times I swapped cars and parents in that parking lot but it feels like hundreds.

Driving that distance so often must have taken its toll on my parents, both time and emotionally, because eventually they started flying me back and forth by myself. I started when I was eight years old. I’d board a small American Airlines turbo-prop with a plastic “unaccompanied minor” lanyard around my neck and kiss one of my parents goodbye. 35 minutes later I would land and kiss my other parent hello. It was a pretty sweet deal other than not being allowed to accumulate frequent flier miles because I was a minor. I could have reached The Million Mile Club before I got my driver’s license.

The other thing I distinctly remember was my mindset during those drives and flights between my parents. I mentally prepared for the transition. It was like crossing from oil into water. My parents were then, and are now, quite different from each other. Both amazing and loving parents, but they operated by drastically different sets of standards. What was normal in one household was foreign in the other. What was accepted in one home didn’t fly in the other. I learned to adjust my mindset to the standards of each environment.

This is how I first experienced what I would later learn as E+R=O.

EVENTS are always happening.
I always choose how I RESPOND.
My response always creates OUTCOMES.

I began to see that the environment around me was largely not up to me. Sometimes it was dysfunctional and disruptive. I began to understand that the events in my life were not in my control. I didn’t control my parents, their decisions, or how they approached parenting and custody in divorce. They did their best and they did great.

Every kid from a divorced family is shaped by it in meaningful ways. It creates a filter, a lens they see so much of the world through. Looking back I easily could have absorbed a different set of beliefs from my experiences. I don’t have a specific moment when it clicked. I don’t know how I realized it, or why, but I did: I don’t control my circumstances. I control myself. When I control myself I can create better outcomes.

That is The E+R=O Mindset.

Even though I realized this I wasn’t skilled at it. I was just a kid. My impulses often led to poor decisions. Excuses were easy to make when I didn’t get what I wanted. Circumstances still overwhelmed me when they got too hard. But I had something more important, more foundational, more powerful. I had the right mindset. And deep down I knew it.

I was blessed because I developed The E+R=O Mindset, deeply and thoroughly, for years before thinking about the skill of applying E+R=O. There was no rush. No skipping steps. No hustling past the basics. It was that mental and emotional shift in my mindset that laid the groundwork for skill improvement. That made all the difference in my personal development. No doubt in my mind. I believe the same is true for almost anyone.

With the right mindset a world of opportunity opens. So much becomes possible.
With the wrong mindset an unfair world of adversity is all you can see
even when opportunity is right in front of you. Everything looks impossible.

I’ve trained thousands of people and hundreds of teams in the mindset and skills of E+R=O. The skills are the “how to” of responding to anything. A competitive moment, an unfair setback, a sudden change, a frustrating person. Anything.

But before people can build valuable E+R=O skills, they need to invest time and effort to learn and believe in The E+R=O Mindset. Most try to hustle past this because they get impatient to learn what they see as more concrete skills. What they miss is that mindset feeds everything. People who don’t do the work to install the mindset end up with a small and brief ROI.

Through 15 years of training entrepreneurs, executives, coaches, and athletes I’ve observed that without the right mindset in place people just won’t do the work required to build game-changing and life-changing personal skills. It’s particularly true with E+R=O. Fortunately mindset can be taught and learned. For people and teams who want to compete and love to win, The E+R=O Mindset is more than a couple quotes about control. It’s part of their constant training and development.

When you prioritize mindset first you accelerate skill development. Just as important you lock it in for the long-term. You’re not looking for a temporary motivational boost. You want disciplined skill that executes under stress and fatigue in the moments that matter. Weak mindsets break and lose. Strong mindsets endure and win.

The E+R=O Mindset is built on three simple and direct understandings.

People learn best by doing, reflecting, and coming to their own understanding. Rather than take my word for it, try on this mindset and see how it fits. This is where the real work begins.

Evaluate of each statement.

Test the opposite of each statement.

Explore the implications of each statement.

Three things happen when you begin to see situations through The E+R=O Mindset. It starts small but meaningful and grows more impactful as you expand it.

As for my story, eventually my E+R=O Mindset blossomed into a productive and valuable skill set. Of course navigating my personal family dynamics but it didn’t stop there. I applied it on the football field where I excelled despite being the smallest player on the field from pee-wee ball through four years as a starter in college. I used it in my social life to deal with bullying and peer pressure, dating and decision-making, establishing core values and building my character blueprint.

For whatever reason I only selectively applied it to my education. I won’t call it a regret because that wouldn’t be true. I just didn’t choose to be a disciplined student until after I graduated college. Once I did though, that spark ignited a blaze that hasn’t stopped and never will.

Ready to build your skill in E+R=O?
Join the Daily Discipline Community to access courses, workshops, and resources today.

Now is the Time for Entrepreneurs to Double Down on Discipline

You have no destiny other than your discipline.

Reflecting on the past 8 months, it's obvious now...

Empathy is a Super Power

What exactly is empathy and why is there so much buzz about it?

In another blog I wrote about how...