<< Back to Blog
Culture 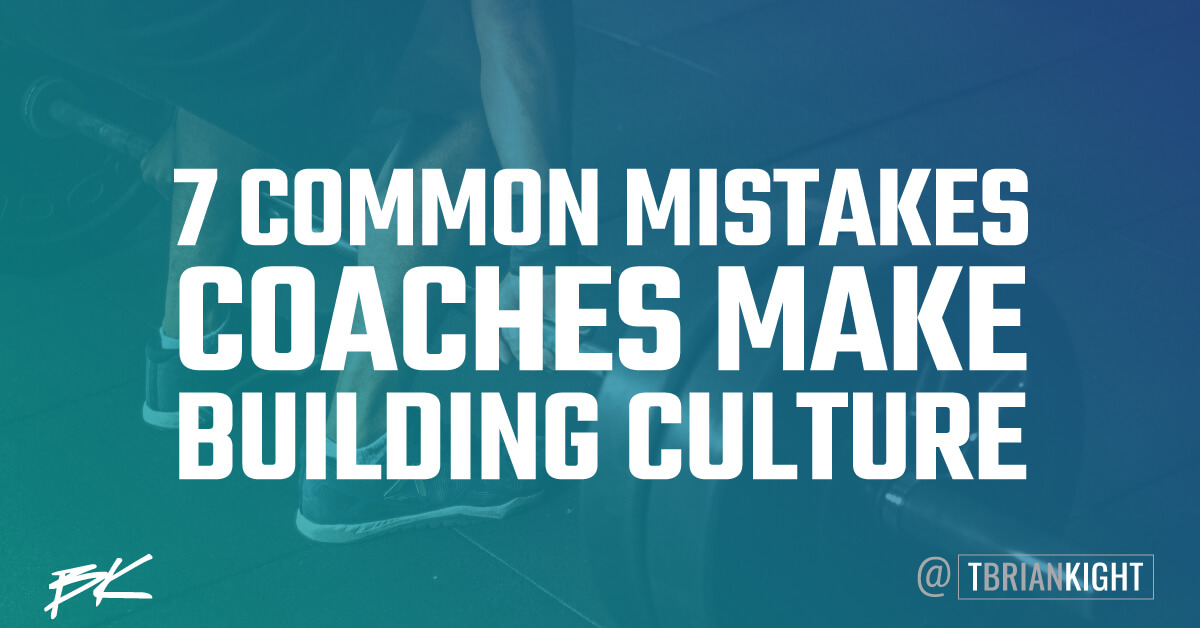 Creating a championship culture can feel like a full-time job on top of your coaching job. It’s not a surprise to me why culture gets overlooked by so many coaches. It’s also not a surprise that good coaches make mistakes in leading culture despite their good intentions and genuine efforts.

You’re already coaching, studying, and strategizing. If you coach high school you probably teach. If you coach college you have to recruit. Those are full-time jobs for a lot of people. You do all of it.

That’s the competitive challenge of being a coach and now, more than ever, it feels like you need to be a culture expert too.

Building culture is a long and difficult road. Changing culture is exhausting. There’s only so much time in the day and so much attention you can give. Improving your performance culture takes longer and becomes even more difficult if you start down the wrong path.

Here are seven common culture mistakes I see so you can avoid them, or stop making them, and get on the right path for your team. None of these mistakes are devastating on their own. But they will delay you and diminish your hard fought effort. In today’s coaching environment, you don’t have any time to waste.

I see this from coaches more often than anything else. It’s a mistake because it’s too many isolated principles that lack structure and overwhelm assistants and athletes. Doing this is like spraying the team with a hose when they’re thirsty. A large volume of water that is mostly wasted.

You would never coach the sport this way. “Let’s teach a bunch of different strategies and techniques and hope some of it sticks when we play.” So don’t expect it to work in your culture.

I see this a lot. It’s impossible to miss. Nick Saban won championships using The Process and now it’s part of everyone’s culture message. I see other messages too. Power of the Unit from Urban Meyer, Do Your Job from Bill Belichick, Sweep the Shed from the All Blacks, Embrace the Suck from the Navy SEALs, and many others.

That’s their culture, not your culture. It works for them because it’s who they are and they worked to uncover it themselves. They designed, defined, aligned, and refined it to match their style and meet the specific needs of their strategies and personnel.

Creating a culture of authenticity — true to your environment, style, needs, and strategy — beats copying a culture that works for someone else.

This is headed in the right direction but follows the wrong path. Or said better, follows too many paths.

First, it’s likely to repeat the first mistake: put a bunch of important ideas in front of the team and hope some of it sticks.

Second, this usually introduces too many systems and ideas at once that don’t fit together smoothly. I talk to coaches who read 5-7 books in the off-season and get fired up about 2-3 ideas from each book. They try to bring all these ideas together into one stream of messages, which they’re excited about.

This is like carefully pouring water into someone’s hands without giving them a glass. It quickly turns into a mess. The coach usually doesn't think so, but the staff does. And the staff is usually afraid to say anything. So they just let the coach do their thing, then they can move on with their job.

Third, this approach gets coaches caught up in temporary trends and popular fads promoted by best-selling books. A majority of coaches have serious FOMO (Fear of Missing Out) among their peers, especially on leadership trends.

Players don’t see enough of the picture to do this well. It’s not the players' job to craft culture, it’s the coach’s. Players contribute to the culture a coach installs. Asking players to set the culture standards is like asking children to set the standards in the home or drivers to set the rules of the road. Their view is too limited and too filtered by their narrow perspective. No matter how much you love them, no matter how good they are, there are too many critical factors beyond their grasp and above their understanding.

Culture is more lasting than any individual or group of athletes. Players cycle through while you want your culture to remain largely consistent.

Most importantly, if the culture is weak and broken, the athletes usually don’t get fired. The coach does. When things don’t go well, it’s on you anyway. Set your standards and put all your effort into aligning your team.

This is a relic of old management philosophy that gets recycled every few years. Skip it. More effort and energy is put into three weeks of creating this over-engineered statement than three years of effort and energy turning it into any real action in the people it’s intended to inform. People don’t follow documents. They follow leaders. And this kind of document doesn’t even do a good job informing the moment-to-moment actions where culture lives. Skip the mission statement. Put your culture into your attitude, action, and words every day.

People still do this and I don’t know why. It’s not wrong. It’s not inherently bad. It’s usually just easy and lazy. There are no advantages to an acronym besides memorization and that’s not the goal. It doesn’t matter if the acronym is your mascot or any other interesting word. It doesn’t add meaningful value to the belief system you want to install. It’s more likely a distraction or a square peg forced into a round hole, twisting words to make the trick work. Stay away from acronyms. They’re useless constraints at best and clunky burdens at worst.

When you try to make your culture say everything, you end up saying nothing. When you appeal to every standard, you end up with no standard. Building a strong, competitive, aligned culture means identifying the few standards you are committed to and going all-in on them. Let the few standards be your identity that shapes how everyone brings their unique personality to everything you do, including those important things that aren’t necessarily formal parts of your culture.

10 takeaways for coaches on creating the culture you want.

Most coaches understand that team...

What is the Performance Pathway?

Leaders own a big responsibility.

The Performance Pathway is the most important system to...